How do you guarantee transformation of the correct data from your design environment to PLM?

When you look at all PLM systems one of the fundamental issues they face is getting the correct, good quality data into the PLM system in the first place. “Crap in, Crap out” is a phrase that has been used to describe this problem whenever talking about transferring information from one system to another. How do you guarantee the correct information is transferred from your design environment to PLM?

Some systems achieve this be dedicated plugins for specific CAD systems or toolbars that sit inside the product with Microsoft office being a good example. With Sovelia PLM we have a mix of solutions to interact between various computer systems and PLM. For example, Autodesk Inventor or AutoCAD have dedicated CAD Add-ins as many of our customers want to complete common tasks without leaving the CAD environment. Others try to produce a “one size fits all” approach of a tool that works with multiple systems. Each has its unique benefits to customers and PLM developers.

What about a one-off integration

Or what about if you want to send and receive specific data from PLM that isn’t covered by a standard plugin or integration? Then things become less clear. As well as dedicated plugins for the common programs, Sovelia PLM has another approach which is called Sovelia Sync.

Sovelia Sync is a portal between the desktop computer and the PLM environment. Files placed on the local machine get automatically synchronised between the local computer and Sovelia. Because we setup this secure pipeline via a user login we can access data as well as files from PLM.

The next step was to create an API (Application Programming Interface) for Sovelia Sync. This allows developers to interact with Sovelia PLM from the desktop machine using standard code to get and send data. The API allows custom interaction with Sovelia PLM in a standard way using existing security features like user logins. Symetri developed the API in the common computer language of .net making it accessible to as many people as possible.

The above theory all sounds great, but how does it solve real world customer problems? We had a customer that wanted to use AutoCAD Mechanical and the BOM function within it to generate a BOM in AutoCAD Mechanical, but then link and create the BOM and items in Sovelia PLM. They wanted to query Sovelia PLM to find out if parts/items already existed, use information already typed into the system thus reducing errors and repetition ultimately saving time. 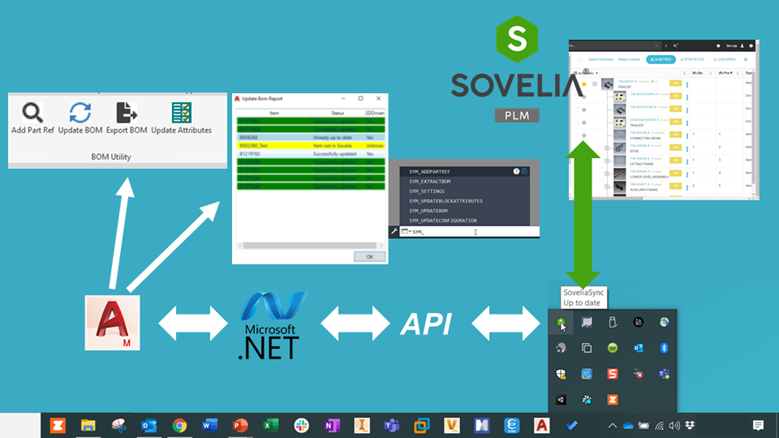 So in a very short space of time as part of the implementation project a .net programmer not familiar with Sovelia PLM was able to build customer specific functions into AutoCAD Mechanical.

Watch the video for further information.

Watermarking can signify whether the document is a preliminary version, not ready for production or just a document for pre-review of a design. A watermark stamp is hard to miss and will most likely eliminate the risk that production is done from non-released documents.

Before we at Symetri can begin to offer a solution, it is our responsibility to always collaborate and try to find the best option for a specific company and their business goals, and always communicate what challenges a solution we recommend will solve.